The Day I Met Alexander Skarsgard 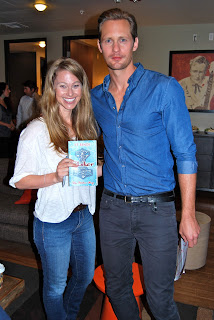 It’s no secret that I picture Alexander Skarsgard when I write Elsker’s Norse God of Winter, Ull.  He’s tall. He’s gorgeous. He’s Swedish. He’s a great dresser.  I mean, what’s not to love?

So when my uber-awesome and crazy-well-connected friend told me Skarsy would be a guest on Conan, I grabbed a copy of Elsker and a pen, obsessed over what shoes to wear (I went with four inch nude heels), took a slightly insane journey, and crossed my fingers.

And then this happened. 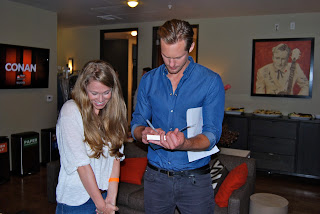 HE SIGNED MY BOOK!

He pointed to the title and said, “That’s Scandinavian.”  And I nodded like a bobblehead. Because when your imaginary character comes to life in the form of Alexander Skarsgard holding your very own book that you kind of wrote about him, you have no words.

And then he said, “Ah, love.” (Elsker means love in Norwegian, which is like kissing cousins to Swedish.)  And I nodded again and maybe babbled something incoherent about it being about mythology or something that betrayed my very clear blondeness and ginormous crush.

Some more words were exchanged (spoken words on his part, howler monkey like squeaks from me), and then HE SIGNED MY BOOK!  He wrote “Love,” then drew an arrow to “ELSKER” and signed his name. 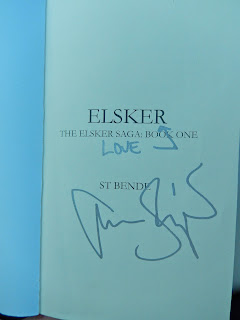 And bless my heart, I didn’t fall over. Victory! My goal for the encounter was to not fall over. Being charming or witty or even just coherent was obviously going to be out of my reach.

It was hands down, without a doubt, one of the very best days ever.  I honestly don’t know how things could possibly get better than this.

And having just met Vampire Eric, and being on the lot and all, Elsker and I made one more stop.  We swung by Merlottes, where I tried not to weep openly at being in the very spot where Sookie Stackhouse and the extremely good looking Vampire Eric play. 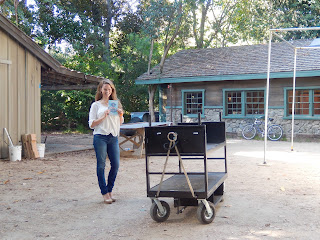 A HUGE thank you to the VERY awesome guy who made this happen.  I. Love. You. And I will bake you waffles every single day for the rest of your life.

ps - Alexander Skarsgard is not affiliated with Elsker in any way. He does not endorse it, and is not involved in its marketing. He is quite simply the Swedish dreamboat who inspired my Norse god. ;)
Posted by STBende at 1:26 AM

STBende
Author, skier, baking aficionado, Indy Car fan and lover of all things Scandinavian... except fish. Send me an e-mail at stbende (at) gmail (dot) com -I'd love to hear from you!